I'm going divide the field as the Germans do, using the halfspaces. 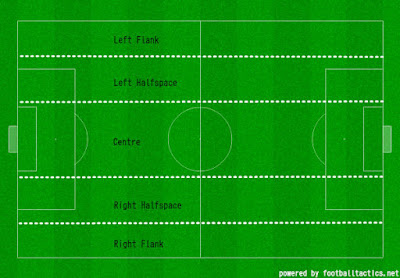 I've noticed similar patterns in their defensive organizations: first of all they all use 4-5-1 as a basic defensive shape. The advantage of this system is that it gives you a 5-men midfield line, which helps a team to defend against verticality. It means that it's easier to force out horizontal passes, and that's exactly what you want if you are defending. Let's see a basic situation: 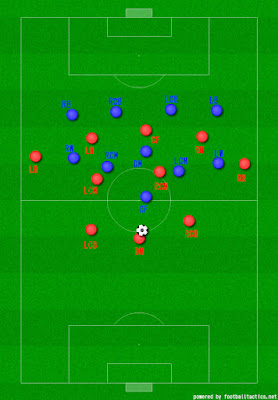 Defensive (blue) team in a 4-5-1, closing down vertical passing lanes, therefore DM is forced to play
a horizontal ball towards the CBs. And here comes the interesting pattern: 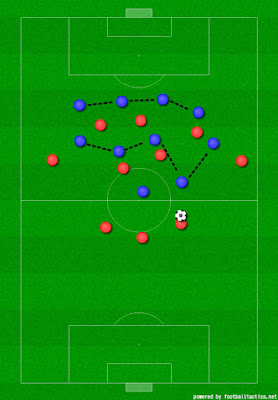 As RCB gets the ball, LCM steps out to close him and the right halfspace down (with his cover shadow). Important to note that LW is defending deeper (to close down the RB), and that LB is closing down the RW in the halfspace, behind the LCM. This system mainly focuses on closing down the vertical passing lanes, therefore we may say, that this is a passing lane-oriented defensive organization. As the LCM steps out, it creates a zig-zag shape on the midfield area, so in the future I will refer to this as the 'zig-zag'. Some may argue, that technically it's a 4-4-2, but it's not, as the starting shape is always a 4-5-1/4-1-4-1 (or a 4-3-2-1, with DM and Wingers defending deep, CMs a little higher, and the central forward).

The other form of the zig-zag is, when the CMs are deeper, and the DM+the Wingers are positioned higher (4-2-3-1ish shape): 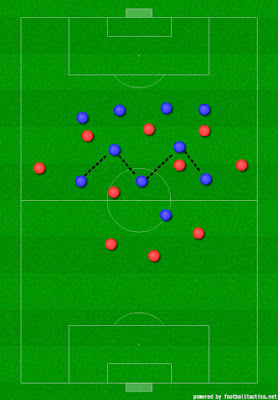 So then let's see some examples from these specific occasions. 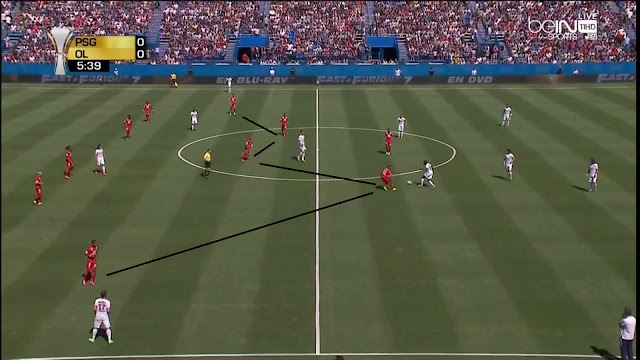 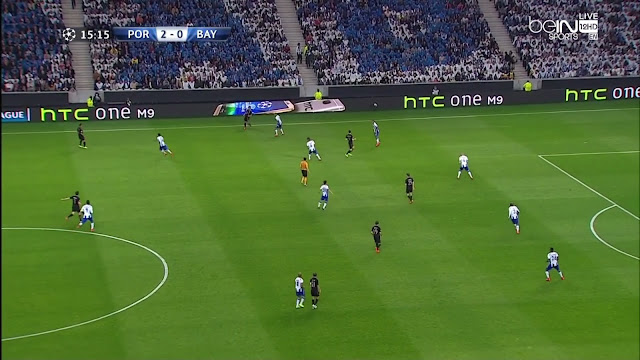 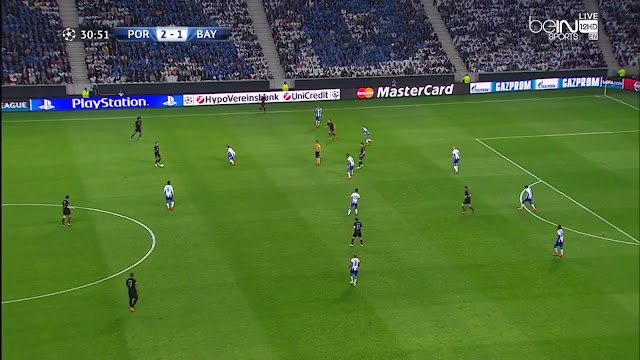 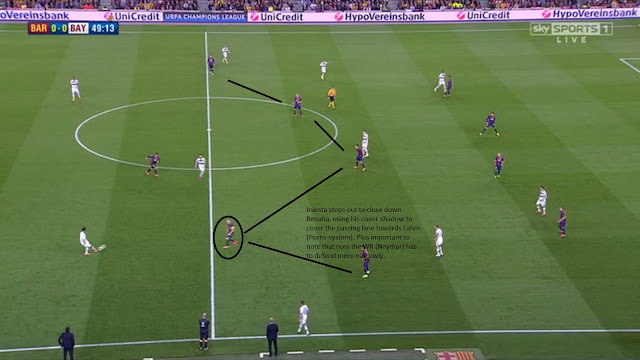 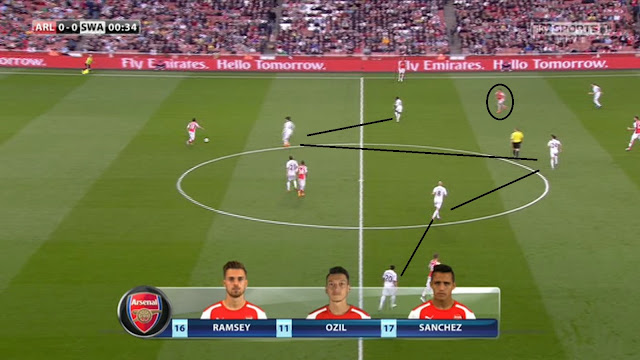 The DM has an important role, to always give defensive depth support for the CM, to cover vertical passing lanes diagonally (on the strong side). Another possible variation is, where the Winger is positioned narrower, to cover the passing lane in the halfspace, so the FB may close down the flank.

A main advantage is that the midfield trio (LCM-DM-RCM) and the CF give a great cover in the central zones and the halfspaces. Though one may think that the CF does not have an important role, however I will show examples, where the lack of defending from the CF allows easy penetration for the opponent. A CF's main task is to cover both horizontal and vertical passing lanes. If the opponent plays with 3 at the back, then the CF must close down horizontal passing lanes, to prevent direct switches between the halfspaces. Vertically his main objective is to cover the space/passing lane in front of the DM and to close down diagonal passing lanes, when the ball is at the halfspaces. 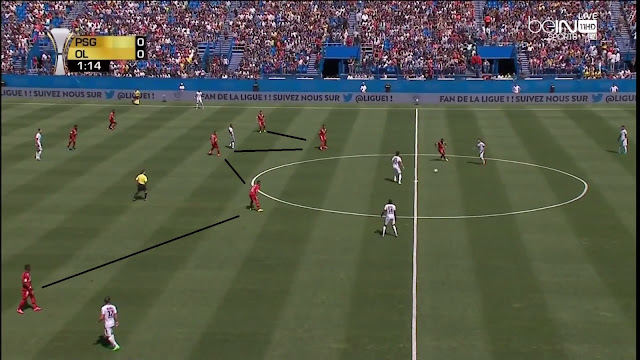 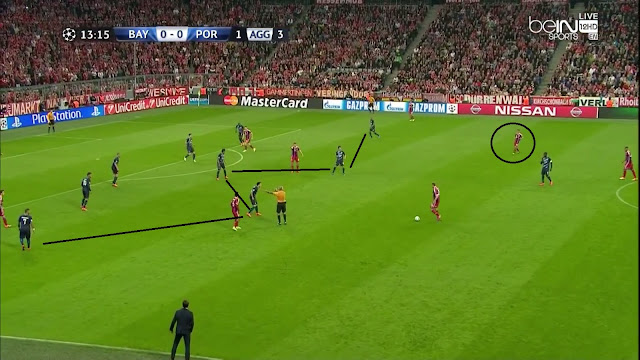 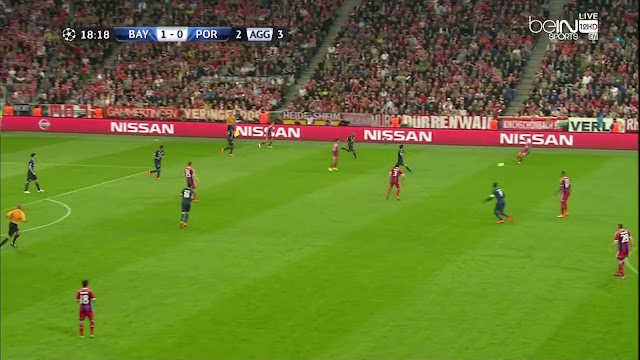 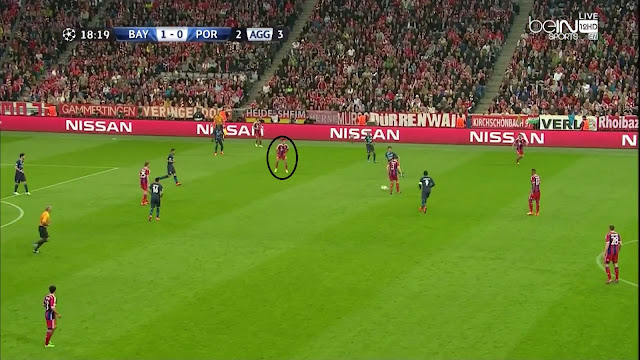 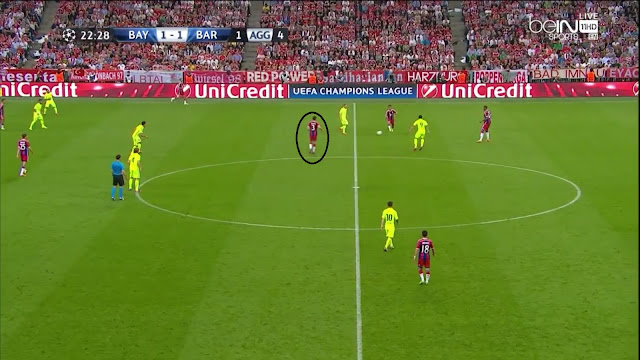 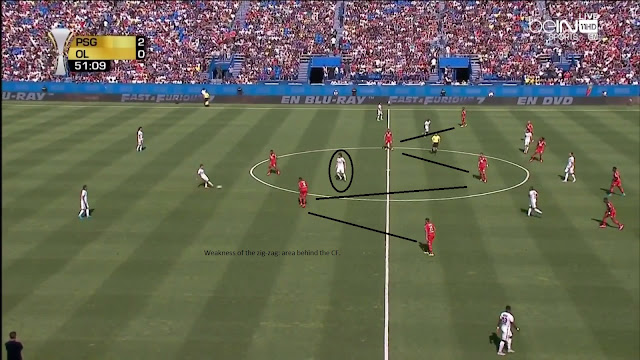 Here are some mistakes made by the CFs. Of course the lack of defending from the CFs are a big vulnerability in every defensive system, though here (as the DM is deeper) a better team may easily exploit that. As soon as an opponent gets the ball wide open behind the CF, vertical passing lanes become accessible mainly in the halfspaces (especially behind the higher positioned CMs). It's a little different in the Barca zig-zag, because there as the CMs are deeper, it may open up passing lanes towards the centre (behind the DM), or towards the flanks (behind the Wingers), where the opponent may create an easy 1v1s against the FBs.

The zig-zag may function as some kind of a pressing trap, especially against teams, who are weaker in positional play. As I wrote earlier, the first step is to force out a horizontal pass (ideally between the 2 CBs), then the CM starts to press, therefore the CB has to try a long ball or to pass backward to the goalkeeper.

Most of the time this system is pretty solid, hard to break (just look at Porto's defensive record in the League or CL, conceded goals and shots), though the 6-1 defeat against Bayern showed the system's disadvantages perfectly (and the genius of Pep). Pep decided to play with two wide-men (Rafi-Lahm on the right, Bernat-Götze on the left) to stretch Porto's midfield line horizontally. The most important was the FBs (Bernat-Rafi) deep positioning, which forced Porto's CMs to stay in position (Wingers had to stay deep too, look at the direct switch from Badstuber towards Lahm). Because if they had attacked Bayern's CBs, then after a short horizontal pass towards Bernat or Rafi, passing lanes would have opened up behind the CMs. So it may be said that using false FBs (or may be called as false CBs) is a weakness of this defensive organization.

The other thing Pep did was to put Müller (right) and Thiago (left) to the halfspaces, therefore the opponent's FB was doubled (FB must have stayed in position, the halfspace was open). Because of that, Bayern's CBs looked to pass directly towards Lahm and Götze (if Porto defended narrowly), who could easily find Müller and Thiago between the lines. 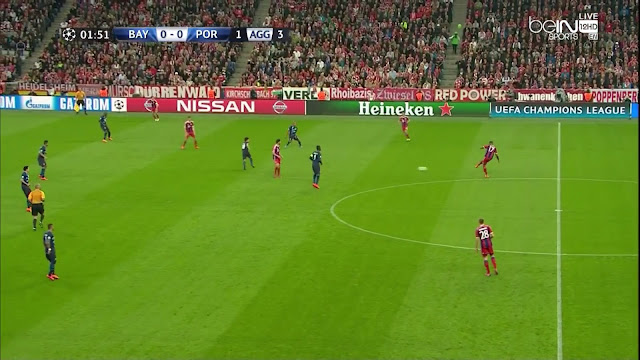 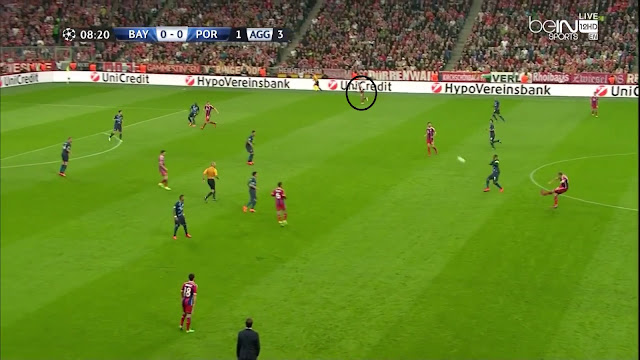 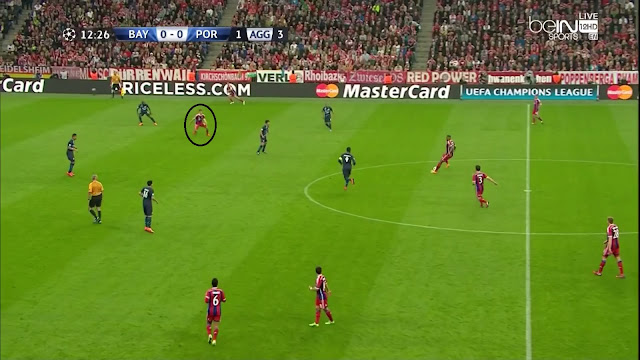 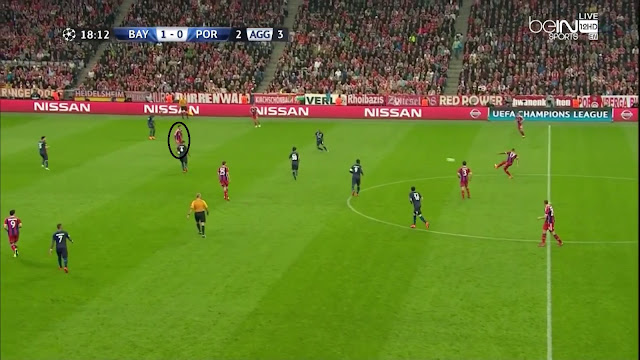 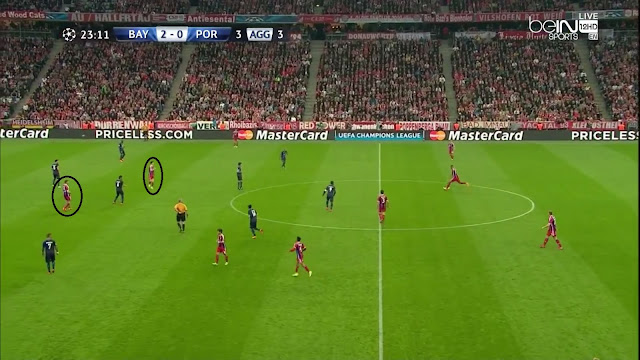 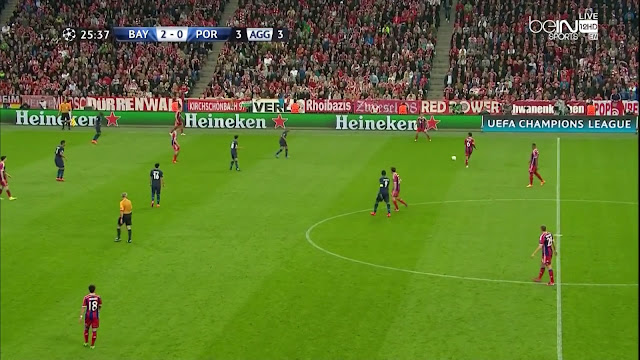 However Barca showed the solution against this offensive organization, with keeping the zig-zag. Solution: CB drifted to the flanks, therefore FB could close down the winger (though the halfspace on the far side looks vulnerable to me, plus as juego de posicion states, the key is to overload one side, then switch to the other side, but Bayern couldn't take advantage of this without Robbery's abilities on 1v1 situations. 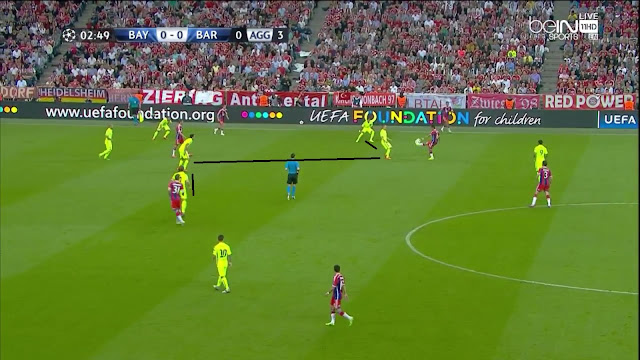 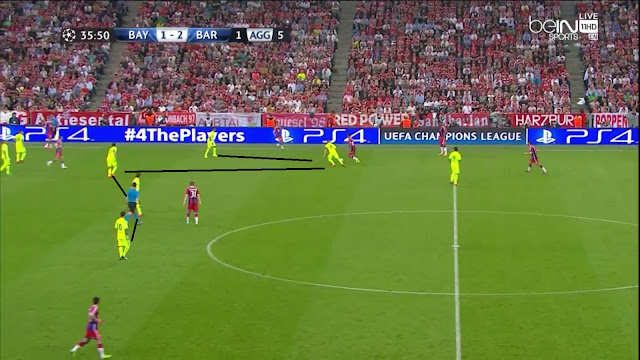 One other weakness is to double the CM, who steps out. As the winger is deeper, there is space for an other player (a false FB, who is more centrally than Rafi and Bernat were against Porto), and after a short pass, the space behind the CM may be exploited. 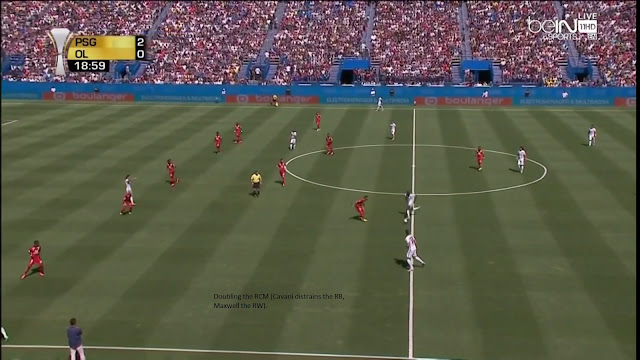 The other variaton of the zig-zag is little different, the CMs are deeper, the DM (mostly because of Busquets intelligence in defending and pressing) and the Wingers are higher positioned. In this, there are more 1v1 situations, as this system does not close down as much vertical passing lanes as the Porto one, though it's main advantage is that after forcing the opponent towards the flanks, it's easier to perform a pressing trap, and to isolate the opponent. However it's main advantage is it's main disadvantage: the DM's high position, it opens up a lot of space available for the opponent in between the defensive line and the DM. The solution from Barca is: if a vertical pass finds an opponent between the lines, a CB has to step out and close him down (basically, to not let the opponent turn towards the goal). 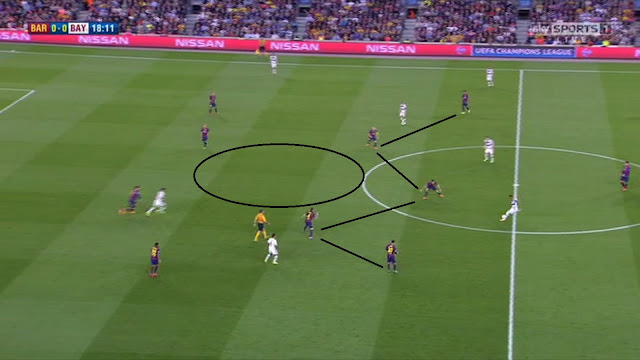 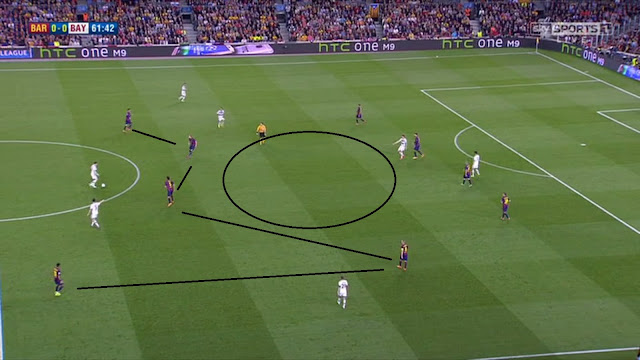 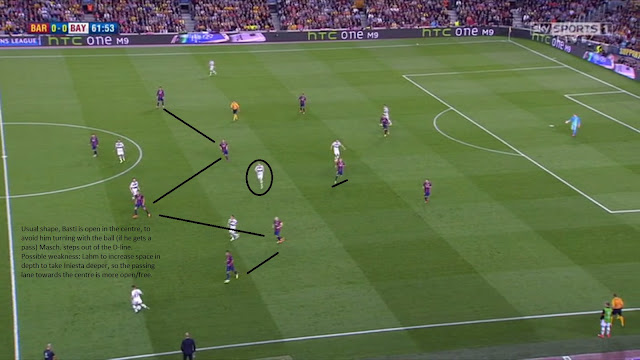 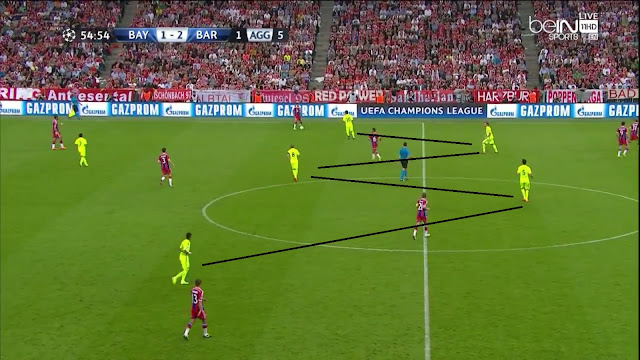 Another aspect to think about is the differences between the 2 system in transitional play. In my opinion the Barca system is more suitable for that, as there are 4 players higher, who are available for a vertical pass in a possible counter attack (probably that's why Lucho uses this system, so after winning the ball Neymar and Messi are already in a high position, from there they are more dangerous).

What I like in this system is that it's a great way to decrease the amount space between the lines (with creating more lines defensively). As the zig-zag highly depends on the opponent's offensive structure and organization, I think a team should know both versions in order to make the opponent's positional play ineffective (closing down vertical passing lanes with the intelligent use of cover shadows, forcing out horizontal passes to use pressing traps, or to force the opponent to play long balls).
Bejegyezte: kisdrogba dátum: 11:31