The Simeone system in the circularity of football

Time is a dimension, what is used to measure the change. The passage of time is the 4. dimension, what means a temporal extension. We process time linearly. The big question of science is examining space and time. We can't split the two continuum, because as Einstein's theory of relativity says: spacetime. Time depends on the observer's spatial correlation (twin paradox). But do space and time exist independently of consciousness, or we just created these continuums to describe the world around us? It worths to think about. As I heard in a series: "Time is a flat circle." So what happened once, will happen again, and again. But what's the difference? The consciousness, that defines the cognitive interpretation of the given situation. The process of learning helps this, in what we deduct conclusions from our experiences, so the personality develops, the behaviour changes. Of course It can only be observed, when the person actually learns from the experiences. That's why a lot of people fall into the trap of time, because they can't learn from the past.

We used to say about football, that it's circular. Here comes the analogy with the previous idea. What happened once, will happen again. Once the defensive football, then the attacking football dominates. This moves the football forward. Somebody invents something, then an other person re-counters, so the evolution is continuous. Of course a lot of coaches fall into the trap, while others can evolve, adapt. It was Tata Martino's biggest mistake. In 6 matches agains Atletico Madrid, he couldn't evolve. Of course on the other side there was Cholo Simeone, who made an amazing system.
Atleti's biggest focus is on defending, and then fast transition to attack. Their defending contains 2 components:
Atleti defends narrow, they want to reduce the opponent's space of the action in this way. This is the main principle : force the opponent's attack to one direction, which means the wide areas. 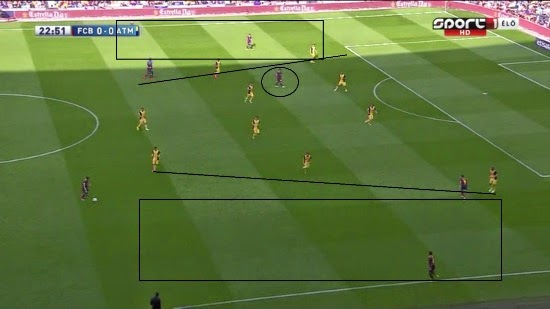 The width of defending is about 20-25 metres, while in depth it's 20 metres, they are very close to each other. They want to keep the opponent far from the goal. Team's big problem is (now Barca) that there are only one player inside the Atleti-phalanx.

But when there are more player between the lines, Atleti use man-marking on the player, so they force him backwards/backward pass. If the opponent pass the ball between the lines, the defender comes to mark him, but there are occassions, when the midfielders marks the player, they reduce the space. The most important is, to not let the opponents turn around, so he could face the goal. 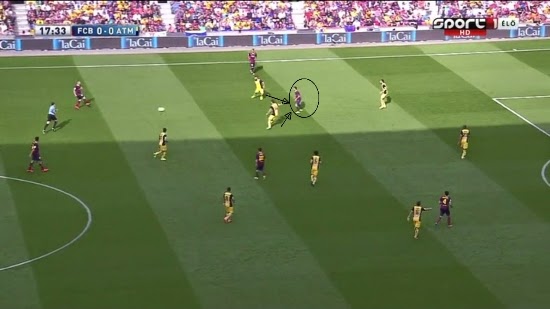 When the ball is in wide areas, they try to make decisive dominance around the ball (they shift to the ball's zone). This means in the 4-4-2 system, that the winger, the fullback, and the closer central midfielder (plus occasionally the closer centre back). They have player advantage, so the attack can't go forward, only option is backward pass. We can see on the pictures, that there are space in the defending, but they can't exploit it, because of the advantage in the middle (maybe with running in from deep positions, but they still have more player, so if the pass is successfull, there are more defending player). Barca yesterday used the only option: crosses. But in the middle Atleti had number and physical advantage, so the crosses didn't work (although only Alves had 15). 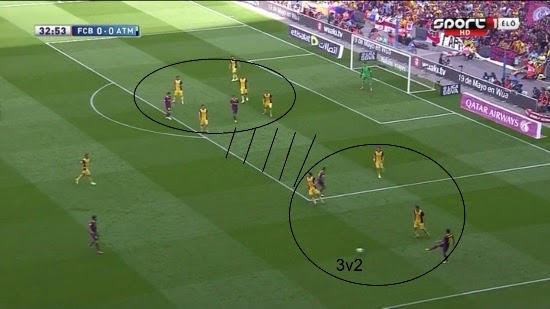 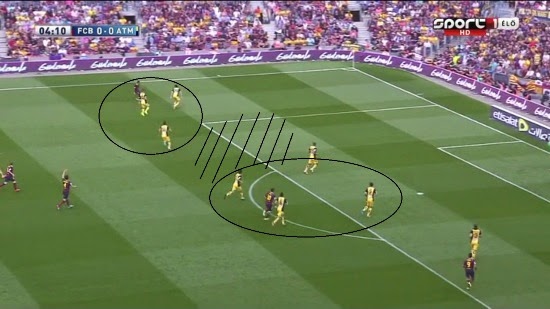 There is one more thing: the players' head orientation. When the ball is in wide areas, they turn towards the ball, and they don't let the ball inside. That's why they can force the ball to wide areas, because after a backward pass the opponent is forced to wide areas again. Barca's solution for this was bringing Messi back to deep positions, he undertaked the skills, and 1 on 1 situations, but Atleti could stop him after 1-2 successful skills (with tackling or with fouls). 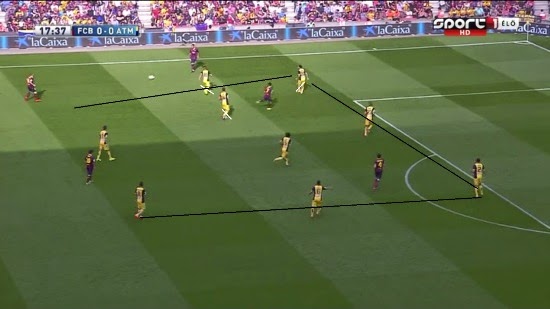 Yesterday there were some counterpressing, too. Especially in the end of the first half, and in the beginning of the second half, Barca barely went out from their half. They press not very often (except from throw-ins, goalkicks). In this way they try to disrupt the opponent's build-up, the ball can't go the safe place, there is no direct goal-threat.